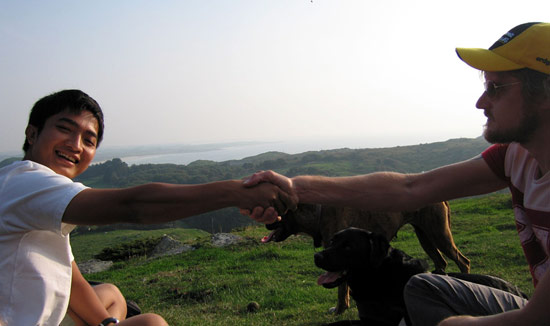 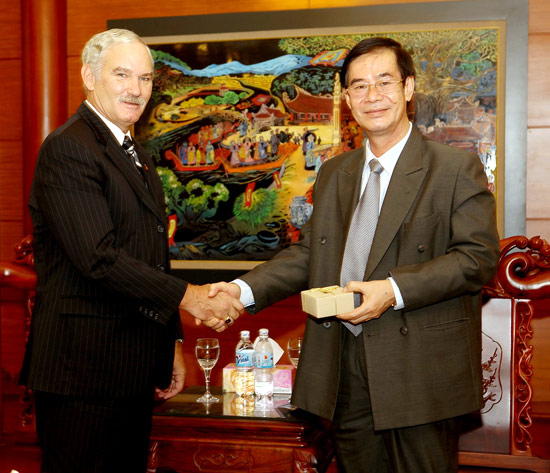 During conferences or large meetings, people are introduced in order of professional rank.

Vietnam's historical achievements are a favorite topic of conversation.

Deference to age, the Buddhist preoccupation with harmony, and "face" (public dignity and respect) all infuse Vietnamese greetings and courtesies, which operate in a polite and reserved manner.

In informal gatherings, Vietnamese people usually shake hands with their right hand, placing their left hand on top of the wrist as a signal of respect. If an elderly person or woman extends a hand to a man, he will usually shake it, but a brief bow of the head also suffices. Women tend to bow to one another in all contexts. Vietnamese who know each other well make eye contact during greetings and courtesies.

In informal situations, people call each other by an honorific and the person's given name. Vietnamese usually have three names, the family name appearing first, followed by a person's middle name and given name. The honorifics are derived from family relationships such that a Vietnamese addresses an older sibling as Anh (older brother) or Chị (older sister). Younger siblings are addressed as Em or Em trai (younger brother) or Em gái (younger sister). Older siblings of parents and their spouses are usually called Bác. A father's younger siblings are Chú (men) and Cô (women). For example, an older sister named Tran Linh Mai would be from the family Tran, and would be called Chi Mai among friends.

When initiating a social exchange, Vietnamese say, Chào (Hi) and Khỏe chứ? (How are you?). The expected reply is, Cám ơn bạn tôi khỏe (I’m fine, thanks) and then, Bạn thì sao? (And you?). The first speaker might then say, Tốt (Good). To meet someone one doesn't know, Vietnamese ask a man, Tên ông là gì?; a married woman, Tên bà là gì?; an unmarried woman, Tên cô là gì?; a young man, Tên anh là gì?; a young woman, Tên chị là gì?; and a child, Tên em là gì? (all meaning "What is your name?"). To introduce oneself, one can utter Tên tôi là___ (My name is___).

When it comes to farewells, a Vietnamese may say, Gặp lại sau nhé (See you later). The conversation is typically closed with a handshake or bow and either Chào anh or Chào chị (Goodbye), said to a male or female, respectively.

A formal and traditional greeting, practiced more in the country than the city, is a bow and a prayer-like gesture with the hands, fingertips touching the chin. In formal settings, Vietnamese prefer to be introduced by a third party who may ask questions about age and family status. This is not intended to be prying, but rather establishes the correct form of address (see above). Eye contact is typically avoided in polite circles, as this is thought to invade another’s privacy and honor.

Vietnamese greet each other formally with, Chào buổi sáng (Good morning), Xin chào (Good afternoon), Chào buổi tối (Good evening), or Chào mừng bạn (Welcome). This is typically followed by, Bạn có khỏe không? (How are you?), to which a suitable response is, Cám ơn bạn tôi khỏe (I’m fine, thanks) and then, Bạn thì sao? (And you?). The first speaker might then reply, Cũng tàm tạm (Well, thanks). Introducing oneself follows the same protocols as with informal greetings (see above).

The key to successful commerce, so Vietnamese believe, is the ritualized adherence to rank and the buttressing of "face." Thus, forms of address and greetings largely mimic those within formal discourse. Although most Vietnamese do not speak English, certain Western business honorifics have crept into the language, so that it is now customary for people to be addressed as Chairman or Director followed by their family name. For example, a Director named Nguyen Thuc Huy would be addressed as Director Nguyen.

During conferences or large meetings, the highest ranking person of one organization is introduced to the highest ranking person of another, followed by other employees in order of professional rank. This way, Vietnamese businesspeople can comprehend the dynamics of each other’s companies while upholding a due sense of reverence for age and experience.

Business cards are usually exchanged at a first meeting, and are presented and received using both hands. Vietnamese businesspeople appreciate it when foreigners translate their cards into Vietnamese on one side, with that side facing up during its presentation.

The necessities of "face" and harmony prevent Vietnamese from broaching subjects that might provoke anger or hostility. While it is ordinary for details of age, marital status, children, and income to be discussed in order to establish the correct mode of conduct, too much depth is likely to cause embarrassment. Soccer, food, travel, and business are all acceptable topics. The Vietnamese are fiercely proud of their country’s long and remarkable struggle for independence against the Japanese, French, and Americans, so the country’s historical achievements are also favorite topics.

Anyone who breaches the complicated codes governing forms of address might find themselves causing minor offence which in turn results in loss of public "face."

Making eye contact in formal and business settings is regarded as presumptuous and insulting unless there is a robust bond between parties.

Vietnamese will not wave or beckon with a finger during meeting or greeting, as this is construed as trying to dominate someone.

Vietnamese dislike being touched on the shoulder because it is believed that a genie resides there. Similarly, it is a taboo for Vietnamese to touch one another on the head—the home of the soul. If the soul is disturbed, it may spend an eternity wandering without rest.