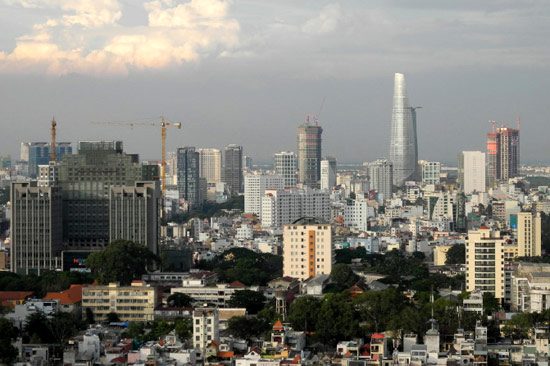 Sitting on the banks of the Saigon River, Ho Chi Minh City is Vietnam's largest city and its economic center. 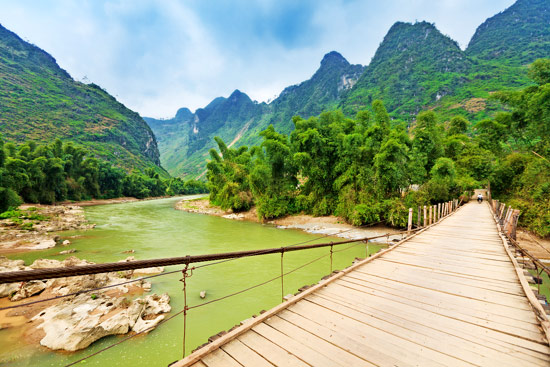 Highly forested, the terrain ranges from coastal deltas to mountainous regions, and climates vary as well. 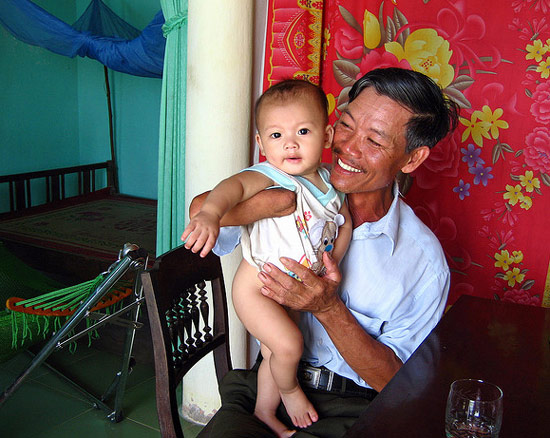 The Viet or Kinh group comprises most of the population, with a total of 54 ethnicities officially recognized.

Most Vietnamese identify with Buddhism, but the vast majority of people do not strictly follow a religion. 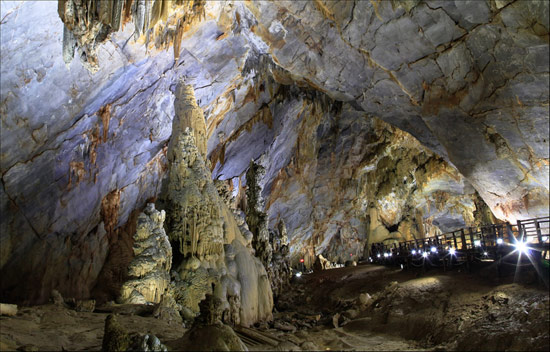 Sharing its northern border with China and western borders with Laos, and Cambodia, the Socialist Republic of Vietnam spans an area of approximately 329,247 square kilometers (127,123 square miles) on southeast Asia’s Indochinese Peninsula. To the east and south, its 3,400-kilometer (2,112-mile) coastline meets the South China Sea in the shape of the letter S.

Most of the country is either hilly, mountainous, or thickly forested. The major rivers are the Mekong, Ma, Perfume, and Red.

The main mountain range is the Annam Cordiller, which runs parallel to the coastline with several areas of elevation reaching more than 1,800 meters (6,000 feet). The highest point is Fansipan Mountain at 3,144 meters (10,315 ft). The majority of Vietnamese cities and farms are found in or near river valleys or deltas, especially where the Red and Mekong rivers meet the South China Sea. The fertile land there yields abundant crops such as rice.

While there are more than 50 ethnic groups in Vietnam, the vast majority are Kinh or Viet. Other sizeable groups include the Tai, Tay, Khmer Krom, Muong, Hoa, Nung, and Hmong. The official language of Vietnam is Vietnamese. Other languages spoken are Chinese, French, Khmer, and English, as well as the languages of mountain groups.

Vietnam has no official religion due to its Communist government, and its people are generally not religious. Some Vietnamese, however, do visit temples or churches and offer ancestral prayers. They practice Vietnamese folk religion, Buddhism, Christianity, Caodaism (a blend of Confucianism, Daoism, Buddhism, and Roman Catholicism), Hoahaoism (a neo-Buddhist religion found throughout the Mekong delta), and Islam.

Community and family values are important to Vietnamese culture, with ancestor worship also a part of society. The concept of having a "good name" which is called danh thom and translates to "fragrant name" is of paramount importance and far more valuable than any material possessions.

Vietnam began as three separate regions known for centuries as Tonkin, Annam, and Cochin, representing the northern, central, and southern parts of the present-day nation respectively. The Chinese conquered Tonkin in 111 BCE and remained there until 939 CE, when they were expelled. Newly independent Tonkin moved south and conquered many of the Champa people in Annam. However, Tonkin and Annam remained separate until their unification in the 18th century.

The Portuguese and English arrived in the 1530s and were interested in trade rather than conquest. However, the French, who sailed into Cochin waters in 1859, were looking for submission. French colonial rule in the region they called Indochina lasted for more than 100 years. Beginning in the 1930s, France's fraying domestic economy and power structure gave rise to a variety of Vietnamese resistance forces that saw a glimmer of light at the end of the colonial tunnel. Under the leadership of revolutionary Ho Chi Minh, the Vietnamese ousted the French in 1954, which resulted in the country being divided into north and south Vietnam being communist and anti-communist.

A war between the two halves broke out and continued, eventually including support from the United States on the side of the anti-communist south. The country finally united under communism when the south lost in its capital city of Saigon in 1975. Vietnam went on to triumph over their neighbor, Cambodia, overthrowing the genocidal Khmer Rouge in 1978.

Once the Soviet empire began to implode in the late 1980s, Vietnam relaxed its socialist policies and tried capitalism. However, since the communist party remained in firm control of the country, capitalism was only allowed to function on a small scale. The regional fiscal crisis that started in 1997 added more weight to Vietnam's already burdened people, and the country was slow to recover, but by 2003 the country’s economy was stronger than it had been in decades. Vietnam’s economy continues to grow, thanks to increased trade and expansion within the industrial, IT, and high-tech sectors.

Vietnam is generally tropical and monsoonal, although the country’s mixed terrain does cause some variation. The northern part of the country tends to be more temperate, but for the most part, Vietnam is humid all year with an abundance of rainfall in the summer months. The temperature on average is around 23 degrees Celsius (73 degrees Fahrenheit).

The country’s forests, mountains, coastline, and wetlands provide the perfect homes for a vast array of wildlife. Vietnam is home to more than 270 species of mammals as well as 1,500 species of woody plants, 800 bird species, 180 species of reptiles, and 80 species of amphibians. Examples include such rarities as the Indochinese tiger, snow leopards, black bears and sun bears, giant catfish, and Sumatran rhinos.

Although large swaths of habitat continue to be cleared for lumber and farming, there are 30 parks set up to provide the animals official protection. Primates such as langurs, rhesus monkeys, macaques, and gibbons are particularly dependent upon the forests. The government has initiated a replanting program in an attempt to replace the tropical forest land cleared.

Vietnam is a socialist-oriented market economy which has been working to recover its economic system since ending the war in 1975. Currently, it’s a blend of free market and state-planned economy, and it’s gradually becoming increasingly capitalistic. Its liberalization of policies has helped with this recovery somewhat, as has its joining of the WTO. Since the Soviet Union collapsed in 1990, the country has been more open to trade with nations outside of other communist countries.

Most Vietnamese work in agriculture, service, and industry, and main exports include clothing, crude oil, seafood, coffee, electronics, and rice. The Vietnamese currency is the dong, and the capital city is Hanoi.

The unicameral National Assembly of Vietnam has 496 members and represents the highest branch of government in the country. There is also a judiciary branch with the Supreme People’s Court as the highest court and lower courts such as local district courts.